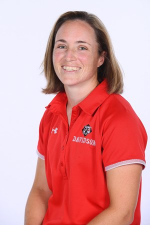 Meghan Gill begins her fourth year as assistant coach for the Davidson women's soccer team after joining the program in June of 2018. She added the role of recruiting coordinator prior to the 2021 season, after helping the Wildcats go 15-12-6 in a two-year span and reach the Atlantic 10 Tournament final in the 2021 spring.

Gill came to Davidson after a two-year stint at Davis & Elkins College in Elkins, West Virginia, as the head coach of the Senators women's soccer program. She led the Senators to their first-ever NCAA Tournament in 2016.

"I would like to thank head coach Denton, director of operations Madison See, and the search committee for the opportunity to join the Davidson College Women's Soccer program," said Gill. "Knowing Davidson College's culture of academic prowess and athletic competitiveness, I am excited to join coach Denton and the Wildcats staff to continue to develop our student-athletes into successful people, incredible academics, and driven players. Coach Denton has a tremendous vision for the Davidson College women's soccer program, and I look forward to joining this team to continue the growth and traditions of it."

During her first year at the helm in 2016, Gill took over a D&E team that was coming off a Great Midwest Athletic Conference Regular-Season Championship title and bested that mark by leading the Senators to the 2016 Great Midwest Athletic Conference Championship Tournament title and the program's first-ever NCAA Tournament berth. In addition, she had two players earn All-GMAC honors and another two players get named to the Division II Conference Commissioners Association (D2 CCA) All-Midwest Region team.

She joined the Cougars women's program for their inaugural season in 2012. During that span, she helped guide Columbia to 55 wins, along with three AMC Regular Season championships, two AMC Tournament Championships, and three NAIA National Tournament Appearances.

Gill was recognized before the 2015 season as one of 15 women by the National Soccer Coaches Association of America in the 30-under-30 program, designated for the top up-and-coming coaches in the game.

The Lock Haven, Pa. native also worked with the men's program in Columbia, as they also tallied 55 wins during the span with an AMC regular season championship. The Cougars had a pair of trips to the NAIA National Tournament, reaching the Sweet 16 and the Elite 8.

Prior to her move to Missouri, Gill spent five years in State College, Pa. as a midfielder and defender for the Nittany Lions under head coach Erica Dambach. Gill, who was a part of five consecutive Big Ten regular season championship teams, made 42 appearances in her career, scoring three goals and recording two assists. She was a three-time Academic All-Big Ten recipient and took home second-team all-conference honors during her sophomore year in 2008.

A graduate of Penn State in 2012, Gill earned her bachelor's and master's degrees in accounting. She also obtained a master's degree in business administration from Columbia College in 2013.