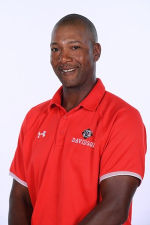 In 2021, Errin Stanton is entering his third year as goalkeepers coach with the Davidson women's soccer program.

While at Davidson, he's coached one of the top goalkeepers around in Mary Grace Bunch, a two-time All-Atlantic 10 selection.

“I’m very happy to add Errin to our women’s soccer staff,” head coach Adam Denton said upon Stanton's hiring. “His background in goalkeeping as a coach and as an experienced player will not only benefit our goalkeepers, but also our whole team. “Errin has been involved in soccer at many levels and now has the opportunity to continue his coaching at the college level as part of our staff.”

Stanton was a former standout goalkeeper at Pfeiffer University. During his career, he earned All-Region Honorable Mention, and was a two-time All-CVAC and First Team All-Defensive honors. Stanton still ranks in the Pfeiffer single-season record books in season low goals against average (0.93), shutout record of seven and was part of a team that produced 10 consecutive wins.

A four-year starter at Pfeiffer, Stanton played professionally in the US USL(D3), A-League and MLS levels. He has coached teams and goalkeepers at the high school, elite club and semi-professional elite club levels.

“I would like to thank Adam and the Davidson Community for the opportunity to join the Wildcat women's soccer program,” said Stanton. “I am excited to join coach Denton and the staff to continue to develop our scholar athletes. Coach Denton has an outstanding vision for the Davidson College women's soccer program, and I look forward to joining this team to continue the growth and traditions.”

A 1998 graduate from Pfeiffer, Stanton earned is degree in criminal justice.

He resides in Charlotte with his wife Jena, and two sons Elijah and Julian.