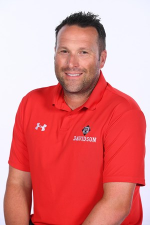 Adam Denton joined the Davidson staff in 2013 and became the program’s fourth head coach in December, 2016 after a stint as associate head coach.

The 2021 campaign will be his fifth at the helm and comes after significant strides the previous two seasons. The two-year upswing included a 15-12-6 record and peaked with an Atlantic 10 championship game appearance in the spring of 2021, after the 2020 fall season was delayed by COVID-19. Denton was named A-10 Coach of the Year.

The 20-21 Wildcats went 7-4-3 with a 4-2-2 mark in league play, tops in the A-10 South Division. After going 2-2 in the first half of the league season, Davidson improved to 2-0-2 in the second to reach the A-10 postseason for the first time, despite the bracket being trimmed to just four teams. The Wildcats reached the final after a 1-0 semifinal win over UMass, with Ali Menard’s goal 25 seconds into the match holding up. A Hailey Braemer goal gave Davidson a 1-0 lead in the A-10 final in a 2-1 loss to top-seeded Saint Louis, which completed its third straight unbeaten league season.

The 2019 season was also a breakthrough for Denton’s Wildcats. They went 8-8-3 and set multiple school records, including eight straight shutouts, the best A-10 finish and the most A-10 Player of the Week honors (six). The Wildcats also had the second-ranked defense in the league and the program’s longest unbeaten streak (eight games) since 2009, the most shutouts since 2019 (nine) and the most wins since 2011. Bunch earned A-10 Second Team honors and ranked second in the league in both saves percentage (.875) and goals against average (0.57), while ranking 13th and 23rd nationally, respectively. Sabine Chandler set the school record for quickest goal scored in a game, scoring 21 seconds into the Oct. 24 contest with VCU.

Denton credited the statistical and win-loss strides taken in 2019 with the work put in during previous seasons. During his first two years as head coach, Denton focused on building a successful foundation for a team that could compete in the A-10. He’s seen steady improvement, as the team has scored more goals and allowed less each year, including a 21-20 goals advantage in 2019 and a 20-10 margin in the 2021 spring.

"The players continue to be receptive to the changes we are making within the program, as we build a program ready to compete within the A-10 Conference," said Denton. "These changes are not overnight and are implemented over time in a way that our athletes can be successful on the field and also in the classroom."

Denton was an assistant and associate head coach while Davidson was part of the Southern Conference and then helped the Wildcats transition into the A-10 in 2014.

Goalkeeper Becca Ravitz was selected as A-10 Defensive Player of the Week in the 2017 season, and Natalie Connell was selected to the A-10 All-Academic Team in 2018. She also earned the prestigious Watson Fellowship, the second women's soccer player in the past three years to earn the fellowship.

The Wildcats continue to excel in the classroom, continually maintaining a team GPA above 3.0 and obtaining the United Soccer Coaches Team Academic Award. In addition, a majority of the roster qualifies for the A-10 Commissioner's Honor Roll.

Prior to his addition to the Davidson women’s soccer staff, Denton was the Elite Club National League Director of Coaching at Charlotte Soccer Academy from 2009-2013. During his tenure at CSA, he helped develop CSA into a regionally and nationally ranked program.

Prior to the forming of CSA, Denton was a director of coaching at Charlotte Soccer Club from 2003-2009 where the teams under his direction won 12 N.C. state championships and achieved numerous regional tournament victories. During this time, Denton began serving on the Region 3 ODP and North Carolina ODP staffs. He continues to stay involved with ODP and regional scouting.

Denton was a standout college player at Wingate, earning All-American honors in 1999. He broke onto the college scene as the South Atlantic Conference Freshman of the Year in 1997 and went on to be All-SAC and All-Region each of his four years. Denton graduated from Wingate in 2001 with a B.S. in sports management.

He played three years of professional soccer, playing with Everton FC in his hometown of Liverpool, England from 1995-1997. He holds multiple coaching licenses, including the USSF “A” license, the NSCAA Premier Diploma, the UEFA “B” license and the USSF Goalkeeping license.

Denton resides in Huntersville with his wife, Brittany, and two sons, Aiden and Leo.